Forced migration is an umbrella term that covers various migrants’ conditions. In the academic and policy literature, ‘forced migration’ is used to identify refugees, asylum seekers, internally displaced people (IDPs) and stateless people (Ben-Yehuda and Goldstein, 2020). Forced migrants are generally defined as those who have left their homes due ‘to events that threatened their lives or their personal safety,’ often through force or coercion (Ben-Yehuda and Goldstein, 2020, p. 339). The International Organisation for Migration (IOM) defines forced migration as ‘a migratory movement’ for which ‘the drivers can be diverse’, and that ‘involves force, compulsion or coercion’ (IOM, 2019, p.77).

While the term ‘forced migration’ is not a legal concept (IOM, 2019), it captures a phenomenon that  has been magnified in recent years. The UNHCR 2019 Global Trends report (Figure p.2) shows that after 2010 there has been a steep increase in migration worldwide and that by 2019 the total number of migrants was 79.5 million. To contextualize this data, we can examine some root causes of forced migration.

Why are people forced to migrate? Forced migration can be analysed and understood according to the multiple causes that provoke this phenomenon. Generally we can identify three causes of forced migration. Firstly, forced migration or forced displacement can be caused by conflict, which is usually considered to be a human-caused event (Migration data portal, 2021). Conflicts might refer to wars, general violence, human rights violations, and persecution (FAO, 2017). IDPs can also be subjected to these conflicts and as such be considered forced migrants (FAO, 2017). The Internal Displacement Monitoring Centre (IDMC) in its ‘Global Report on Internal Displacement’ (2020) has calculated that out of a total of 33.4 million new internal displacements in 2019 across 145 countries, 8.5 million people were internally displaced due to conflict and violence. These figures add up to a total of 50.8 million IDPs as at the end of 2019 across the world, of which 45.7 million people were internally displaced because of conflict and violence in 61 states (IDMC, 2020). According to the UNHCR (2019) at the end of 2019, among the people displaced worldwide due to conflict, persecution, and conflict, there were 26 million refugees, 4.2 million asylum seekers and 3.6 million Venezuelans abroad. Secondly, forced migration can be caused by disasters related to natural causes (Migration data portal, 2021). Natural causes might refer to different natural disasters, such as floods and earthquakes, but also to environmental changes which force people to migrate, such as deforestation and desertification (FAO, 2017). Some disasters are directly or indirectly  caused by humans. First, due to anthropogenic climate change. Secondly, due to the environmental degradation caused by contamination of air, waters 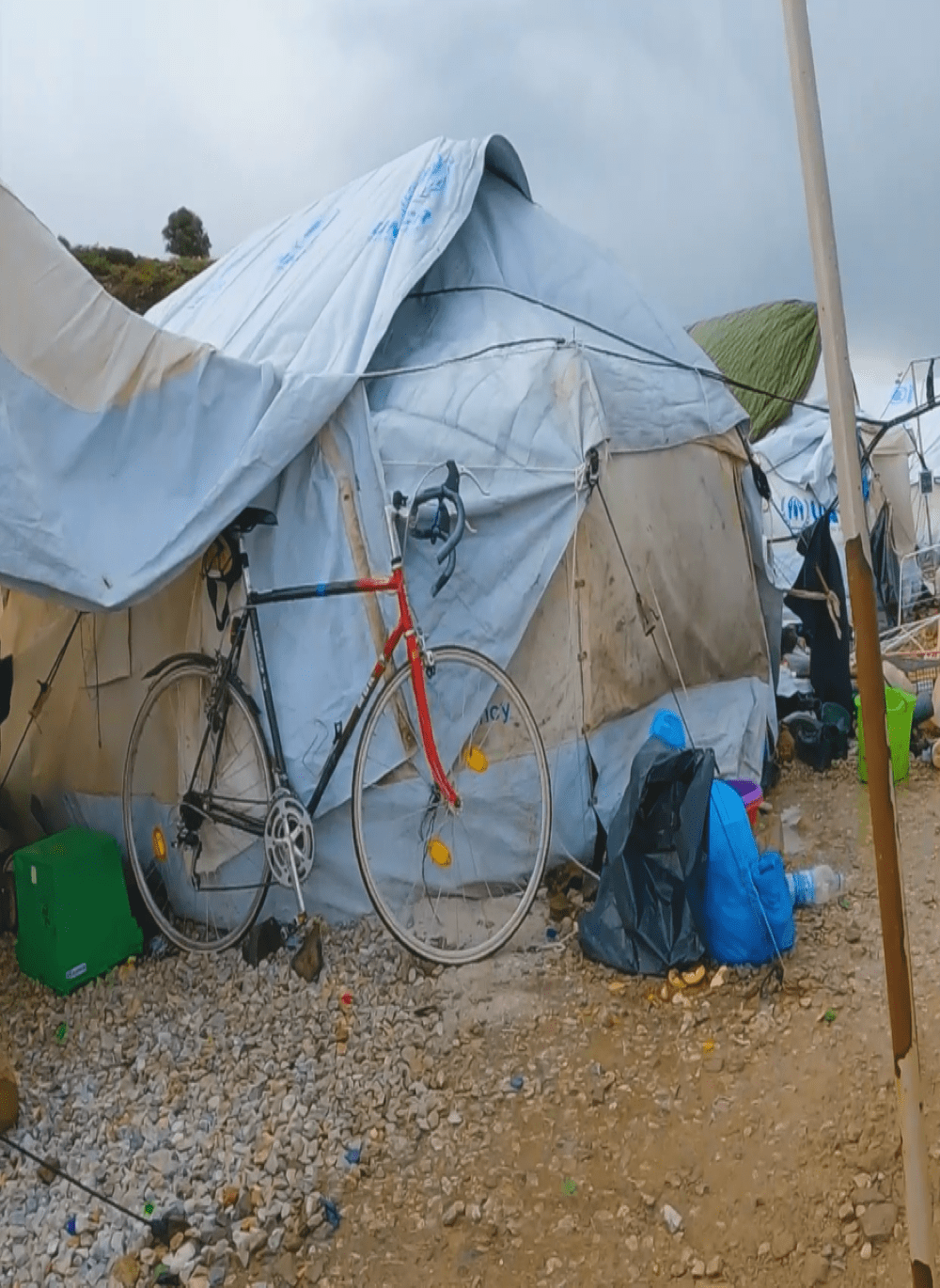 photo: Inside Moria refugee camp on the island of Lesvos, Greece.

The main legal frameworks that protect forced migrants are the Geneva Conventions and the 1951 Refugee Convention, which apply to contexts of conflicts and violence, and thus, protect forced migrants facing such circumstances. The Geneva Conventions and the Additional Protocols are the pillars of international humanitarian law. The fourth convention establishes the obligations of states with regards to the protection of civilians during armed conflicts (ICRC, 2014). Besides playing a role in preventing civilians from becoming forced migrants, the Conventions and the Protocols also ordain the protection of refugees who find themselves in situations of conflicts (Clapham and Gaeta, 2014).The additional protocol I of 1977 states that refugees are protected and as such they are entitled to the right to leave, to some specific procedures for residence, and to protection against deportation (Clapham and Gaeta, 2014). However, the main limitation of this statement is that refugees, to be entitled to protection, must be recognized as refugees before the beginning of the conflict (Clapham and Gaeta, 2014). Article 4 of the fourth Geneva Convention is wider in scope about who can be defined as a refugee, and thus as a protected person under international law. Nonetheless, there are some factors and restrictions in determining whether someone is a refugee and therefore entitled to protection under the convention, and  due to the vague definitions used in the different articles and protocols loopholes in refugees’ right to protection exist (Clapham and Gaeta, 2014).The rights of refugees are more concretely established by the 1951 Refugee Convention, expanded with the 1967 Protocol. This convention defines the term ‘refugee’, it establishes their rights according to the principles of non-refoulement, non-discrimination and non-penalization and it defines the minimum standards to which refugees are entitled, as well as their obligations (UNHCR, 1951). The main principle is the one of non-refoulement,which determines that refugees cannot be returned to a country where they are subjected to a serious risk of their lives and their liberty  once the people have escaped conflicts (UNHCR, 1951). This is a foundational principle in International humanitarian law (Clapham and Gaeta, 2014) Besides the loopholes and the exceptions in which these laws apply, many have also argued that there is a complete lack of legal protection for those migrants who are forced to move because of climate change and environmental disasters (Fernandéz, 2015). Indeed, the environmental migrant definition describes these migrants as people who were forced to leave or chose to do so because of environmental and natural disasters (IOM, 2019),

but the definition of refugees under the 1951 Convention does mention these causes of movement to define a refugee. The clearest case in which the 1951 Convention refugee definition could apply is when people’s movements have been caused by an interlink between conflicts or persecutions with natural disasters or climate change (UNHCR, 2019) (UNHCR, n.d.). In such a case, forced migrants are entitled to the same rights and protection of the other forced migrants under the Refugee Convention. At the European level, forced migrants are regulated according to the Common European Asylum system. The main laws are the asylum procedures directive, the reception condition directive, the qualification directive, the Dublin regulation, and the EURODAC regulation (Migration and Home Affairs, n.d.). Among these, the first three relate to the regulation of forced migrants directly and their rights, whilst the other two refer to the EU Member States. In particular, the Qualification Directive specifies the conditions under which citizens of third countries or stateless people can be granted international protection and classified as refugees or people with the right to subsidiary protection, and the rights that they are entitled to (European Parliament and the Council, 2011). In defining those who classify according to these terms, the Directive follows the definition of the 1951 Geneva Convention, and mainly refer to threats as acts of persecution or serious harm in relation to risks of execution, torture, or armed conflicts (EUR-Lex, 2018). Moreover, the rights of the people that qualify for international protection still refer to the right of non-refoulement, right to residence, family unity, travel documents, welfare, and freedom of movement within a Member State, as the rights listed in the Geneva Convention (EUR-Lex, 2018) (UNHCR, 1951). However, also in this case, migrants who are forced to leave their own country because of environmental and natural disasters are generally not protected under the EU legal framework. In the Qualification Directive there is a list of what counts as serious harm and from whom, but it does not talk about harm caused by climate change (Delval, 2020). A recent case has been created by the Human Rights Committee (2020) ruling that a person cannot be sent back to their country if they risk harm and their life because of climate change. This case concerned a Kiribati citizen who applied as a refugee in New Zealand and who was denied refuge and sent back to their island. Therefore, this case could be considered as a step towards a wider application of the non-refoulement principle, under the legal framework of international human rights treaties, aiming to protect also those migrants forced to move because of environmental and climate change (Delval, 2020).

What are the next steps forward?

In conclusion, it seems clear that there are some shortcomings in relation to the case of forced migration.

Secondly, there are shortcomings in the legal frameworks. Those who migrate because of natural and climate change, which are considered causes of forced migration, are not really protected under the currently existing legal framework. On one hand because most of them are IDPs, which means that most of them do not fall under the international legal frameworks, but under the protection of their own state or under non-binding rules (FAO, 2017). On the other hand, even if they cross the borders of their country, they rarely fall under the definition of ‘refugee’ (UNHCR, 2019).

Finally, the definition itself fails to take into consideration the active role that migrants have when they migrate (IOM, 2019) and fails to understand that the line between voluntary and forced migration could be blurrier in real life than it is according to the legal frameworks (Erdal and Oeppen, 2018). The causes of migration, which are used in this case to determine the rights and the entitlements of people, are often interlinked. However, it is also true that definitions, even if restricted and far from reality, are necessary to protect forced migrants anda lack of legal definition for those migrants who are forced to move because of other reasons remain unprotected.. Governments might be reluctant to enlarge the scope of the definitions since this might mean that there will be more people entitled to protection. As such, modification of the legal framework at international level seems difficult, but no action is not an option. Thus, it seems reasonable to think of establishing regional or bilateral agreements to protect these forced migrants, at least as a first step (Fernandéz, 2015).